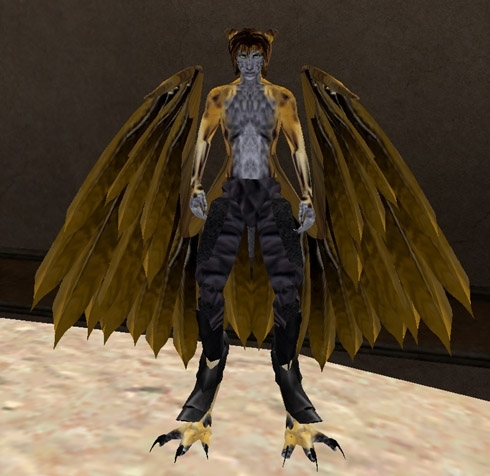 This week’s modding interview is with Morrowind modder sabregirl. When she’s not modding, she works as a college professor in the “Show Me” state of Missouri.

If you want me to show you her interview, hit the jump below.

Gstaff: How did you first get involved in the Bethesda game modding community?

sabregirl: I joined the forums looking for mods and guides to modbuilding. I was initially interested in making new races, since that was one of the most intriguing things for me in Morrowind.

Gstaff: Do you remember what the first project you worked on was?

sabregirl: The first thing I ever did was build a Khajiit re-make that was taller and more magically inclined. After that I remembered my Pharlan Race, which had been merely in the idea and uncompleted novel stage since high school. Since Morrowind seemed to be the ideal medium to bring them to life, I became determined to put them into the game. Much of my later work centered on improving them and giving them other new races to interact with and a back story for how they arrived on Nirn.

Gstaff: You mentioned that The Way of the Talon is your favorite mod you’ve worked on for Morrowind. Can you talk about what makes that mod memorable to you?

sabregirl: With its friendliness to movement in three dimensions, Morrowind was also an ideal place to build a floating Pharlan City that could only be accessed by flying around. I also enjoyed being able to build with lovely and unique plants that Morrowind has, to create an otherworldly feel to my interior and exterior spaces.

I also really like how the main questline of Way of The Talon had multiple possible endings (somewhat similar to the Bloodmoon main quest), which are highly dependent on the player’s actions and whether you play a Pharlan character or not. I also had a lot of fun doing the interaction with some of the NPCs, especially the “spoiled hatchling.” There were really so many interesting quests like that, just thinking about them makes me want to play the mod again.

Gstaff: As a modder, what do you think your greatest strength is? Weakness?

sabregirl: I think finding what other people have done and then being able to innovate on what’s already out there, is really how I operate. I get lots of ideas when I look closely at what others have done. As for a weakness, I’m unfortunately rather bad at scripting — though I did manage to figure out how to make multiple colors of default Bloodmoon werewolves by equipping a second skin on top of the original.

Gstaff: In your time modding Morrowind, were there any other modders you particularly enjoyed working with?

sabregirl: I worked with many intelligent and very talented people, especially since I was primarily re-skinning others work I was very dependent on them. One of my other favorite mods is my Shape Shifter race which is completely dependent on Cortex’s Scripted Spells. I originally thought I could re-write his scripts as my own, but after taking only a short look I realized it would be much easier to just make my mod dependent on his. They fit together so nicely it was really amazing.

I think one of the unsung heroes of the Morrowind modding world is Phyntoswasp. At a time when there were few modelers and even fewer animators, he made quite a number of models including the Alien and Predator models, animated wings, various beast-race parts and several others. I had the pleasure of working closely with him.

Gstaff: Outside of your own work, what other Elder Scrolls mods do you recommend folks download?

Of course there are many, many more, too many to list really. :)

Gstaff: Have you dabbled with modding Oblivion or Fallout 3?

sabregirl: So far I’ve gotten about as far as opening the construction set on Oblivion, though I’ve played the game a fair bit. I hope to try Fallout 3 soon.

sabregirl: I have been spending most of my time playing and being part of the development team for an online persistent world called Higher Ground in Neverwinter Nights. It’s extremely customized from the original Neverwinter Nights. It plays like a mini-MMO-RPG, so it has held my interest for several years now. My Pharlans have their own area on Higher Ground and appear as a subrace.

I’m also playing a bit of Pokemon now that online competitive play is a reality.

Gstaff: What are your favorite games of all-time?

Gstaff: Have you thought about a career in game development?

sabregirl: Yes actually, though I was concerned I would come to hate games and modding if I had to operate on deadlines and schedules. Still, if for some reason academia doesn’t work out anymore, I would definitely consider it.

Hellbishop said on Wednesday, October 7, 2009 at 12:28 pm:
Wowzers! Didnt know sabregirl was still modding for MORROWIND. Love her winged races mod and the very detailed background lore she has created for them. One of the first races with a background history that felt as real and fleshed out as the world of MORROWIND. Still have em all on my mod cds from when they first appeared upon the virtual lands to hunt and rule all that they surveyed.

Thanks sabregirl for being one of fantasy makers :)

DragoonWraith said on Friday, October 9, 2009 at 11:39 am:
Oh man, hey SG! Definitely one of my favorite modders ever, I’m really glad to see this awesome interview.

Man, I need to hang out on the MW forums more.